Raw Milk and the Immune System

One of the most demonized foods in the United States besides saturated fats and cholesterol is raw milk.  However, I believe and feel just the opposite in this matter about this health-giving white blood which is raw milk.  I feel it has been and still is contributing to the health of my immune function and immensely to my family’s health.  I not only drink raw milk regularly, but I also consume kefir, yogurt, raw cheese, colostrum (whenever it is available), butter, and cream that were made from raw milk.

What is Raw Milk?

Raw milk is simply consuming the milk after milking the cow without going through pasteurization (cooking), homogenization, or any other process to adulterate it.

Grass-fed raw milk that comes from a local and clean farm where they follow a good milking practice is not only safe but beneficial to human health.  One of the farms I personally buy from does an excellent job of practicing a clean milking process that I have seen them do when I visit the farm in Pennsylvania from time to time.  The milking machine that is hooked to the cow’s udder transports milk to clean over-sized stainless bottles or a tank where the milk is kept chilled and stays fresh within 7 to 10 days.

I have been drinking whole milk that is unpasteurized and non-homogenized for more than 9 years, and my daughter started drinking raw whole milk at the age of two weeks.  Yes, she was only a two-week-old baby since my wife was not able to produce enough breast milk.  We are both healthy and grateful for this wonderful healthy drink which we are all thriving on.

Both raw milk and pasteurized milk have bacteria in them, but the big difference is that a good quality of raw whole milk has the necessary compounds to take care of the bad bacteria in the milk.  Powerful compounds such as lactoferrin, powerful types of white blood cells (macrophages, leukocytes, and neutrophils), lactoperoxidase, lysozyme, and beneficial bacteria are some of the compounds found in raw milk that will kill, or at least keep these illness-causing bacteria at bay so they don’t pose any health danger. 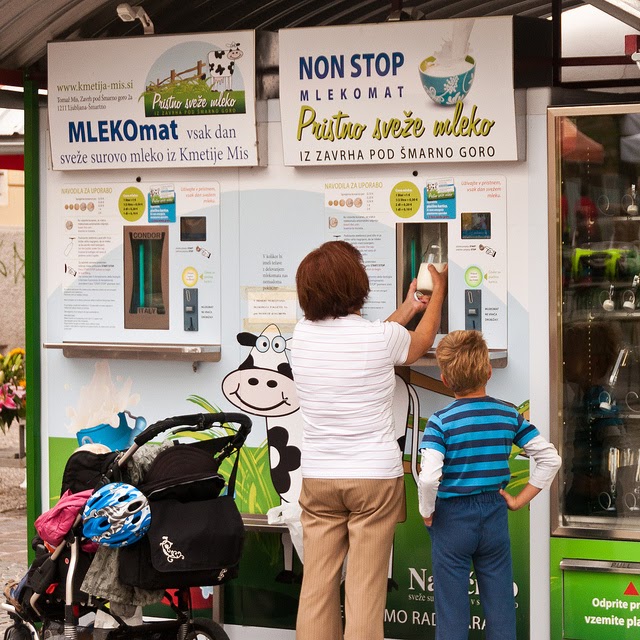 Some countries in Europe have been selling raw milk in vending machines for years.  Can you imagine that?  Several years ago I was happily surprised to see vending machines selling raw milk.  My family and I were in Sicily, Italy, and we enjoyed drinking raw milk during our vacation.  It was wonderful to have easy access to it.  The machine kept the milk chilled and slowly stirred the milk so the cream constantly mixed with the milk.

On the other hand, in pasteurized milk, you will have the above components in raw milk destroyed or greatly deactivated.  Therefore, there is little--if any--effectiveness of these beneficial compounds to kill any pathogens that get inside of the milk.  Consequently, it allows them to grow with little or no resistance.

Digestion of milk protein becomes difficult to digest because milk pasteurization changes the molecular structure of milk proteins. The same thing goes for digesting lactose (disaccharide milk sugar), and many individuals don’t get the lactase enzyme that is found in raw milk.

However, drinking raw milk which has certain good bacteria helps to digest lactose.  And the same thing goes for another important enzyme called phosphatase which is needed for better phosphate and calcium assimilation.

The other issue is that many people are getting some kind of an allergic reaction to pasteurized milk.  When the milk is pasteurized most of the bacteria are dead and break open so the cells of these bacteria will leak protein and other substances into the milk and are just floating around, and these can be toxic.

So you end up drinking dead and broken parts of bacteria all over the pasteurized milk.  All of these dead bacteria and substances in the milk will most likely trigger a histamine release and cause some type of allergic reaction.

Why Pasteurize Milk?  A Brief History of Milk Pasteurization

The pasteurization of milk in the United States started at the end of the nineteenth century (in the 1890s) by Nathan Straus, and it was for a good reason.  At this same time, there was a high incidence of children and infant mortality mainly in the poor-class families who consumed this low-quality milk which was the cause of this high death rate.

The reason you see behind this awful low-quality milk is that at that time many of the cows were living in filthy confinements next to alcohol distilleries for making liquor. These cow farms were known as the “swill dairies.”  Not only were there little or no sanitary and hygienic protocols, but these cows were fed swill which is a waste liquid from the alcohol distillery.

But eventually, Straus was also advocating to make all milk pasteurized whether the milk came from clean and healthy farm cows or not, and his campaign won the battle by making pasteurization compulsory.

Most states and major cities are required to pasteurize their milk, and in the 1920s Congress enacted nationwide milk pasteurization.

Benefits Of Raw Milk for the Immune System

Clean-produced raw milk coming from grass-fed cows has some of the following differences to pasteurized milk:

1- Since raw milk is not heat-treated, thus it is easier to digest for many people who can’t drink pasteurized milk. Therefore, your immune response won’t react in a dysfunctional way that would lead to autoimmune disorders.

3-Raw milk has been used by physicians to cure or reverse many diseases!  Hippocrates, who is considered the father of western medicine, used raw milk for his patients for healing purposes.  In the 1900’s many doctors used raw milk for their patients who suffered from different kinds of chronic diseases.  Mayo Foundations (now it is called Mayo Clinic) used raw milk and published articles about the positive experiences from using raw milk.

4-Calcium and phosphorus can be utilized better by the human body when the milk is not heated (pasteurized).

5-Raw milk has enzymes so your body can digest and absorb the nutrients in the milk.  Pasteurized milk kills these enzymes so the human body will have great difficulty in digesting and absorbing these nutrients.

6-In terms of safety, raw milk contains antimicrobial organisms such as enzymes that kill pathogens.  I don't think you can say the same thing for pasteurized milk since these enzymes are destroyed through the heating process.

7-Raw milk provides vitamins like Vitamins C, A, D, B6,  B12, and CLA which is conjugated linoleic acid.  These nutrients are reduced to a large degree in pasteurized milk.

8-Raw milk, which is alternatively called white blood, because it contains many substances similar to what is found in red blood cells--but without the pigment known as hemoglobin.  Raw milk is rich in many immune system boosting substances:

-Lactoferrin is a glycoprotein that steals iron from pathogenic bacteria eventually killing them, and that is a big help for other immune cells so they don’t become overwhelmed (1).

-A protein enzyme called lactoperoxidase that has a powerful antibacterial property (2).

-Raw milk, as I mentioned above, is white blood that contains many of the Immune System components like T-cells, neutrophils, leukocytes, and many other nutrients that directly or indirectly enhance the immune function (3).

Where to buy raw milk in the U.S.

As you may or may not know selling raw milk is illegal in many states, but there are ways where you can purchase raw milk legally.  This website  RealMilk.com will provide farms that sell raw milk in many states in the country.

Raw milk can be obtained from clean farms that have healthy cows.   This is due to humane treatment and feeding them what they naturally eat which are various types of grasses, and they roam outside in the sun and fresh air.  This excellent combination provides the atmosphere for a wonderful Immune System drink.